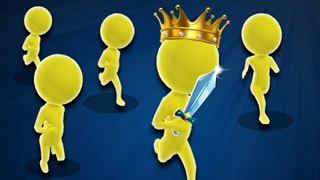 The number of characters will grow as you collect items with plus values. When several groups of the same color are combined, you will see an impressive crowd. The final challenge awaits brave rebels at the finish line in Crowd Pusher, that you have to surround and crush a big boss.

Meyagames is the developer of Crowd Pusher.

Use mouse or touch pad to play this game.