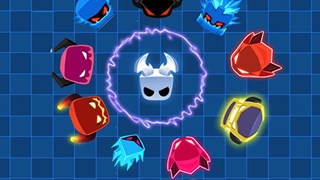 Spin Master puts you in the shoes of a brave hero who must take on dangerous opponents using a wheel of rotating knives to wreak havoc on anyone who dares cross your path.

Using your blades, you must defeat enemy monsters and advance to the next room in an arena where you are trapped. While it sounds simple, you'll change your mind once you see the wave of enemies. By clicking or tapping on your smartphone screen, you can control your character. Dodge the enemy attacks while wearing them out with your blades as you move around the arena. Keep a distance from the enemies with each hit to lower their points. Take advantage of the extra blades dropped by enemies and add them to your aura as they fall. Watch out for special enemies; they drop boosts that temporarily increase your attack speed. Be sure to buy weapons and upgrades to improve your attack! Advance through this world by using the boosters and areas strategically, collecting gold coins, and defeating monster bosses.

Player must rotate the blades around in order to eliminate the opponent.