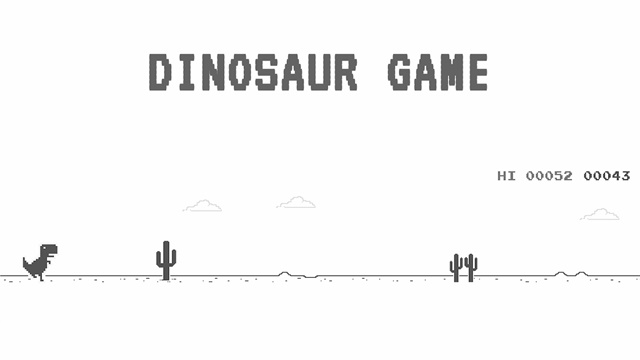 Fun and challenging, Dino Game features a cartoon T-Rex who is out to break the hurdle record. Help the dinosaur reach his goal, because he can't do it on his own. Start a race in the desert, jump over cactuses, set amazing records, and have fun.

A pixel dinosaur is the main character. The goal of the player is to get as many points as possible. Over time, the speed goes up, and the days will turn into nights. Dinosaurs are waiting for things to get in your way that you have to avoid. If the player runs into them by accident, they will die, and the game will start over. And this is how it goes around and around.

To begin, press the space bar or the up arrow. To jump, you use the same buttons. The down arrow lets you crouch. All you have to do on a mobile device is touch the screen.

In the upper right corner, you can see each player's record. If the user gets 300 points in the first game, that will be his record. The record will go up if the player gets more points in the future. It looks like it could go on for a very long time. The game's creators say that they set a limit, and it took about 17 million years to finish, which is about how long dinosaurs lived on Earth. Enjoy!